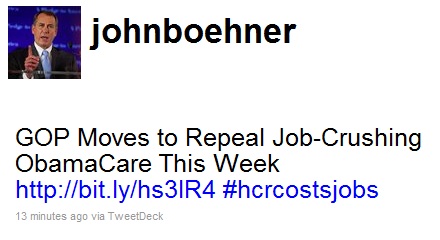 By Elise Viebeck, The Hill

Ahead of this week’s repeal vote on last year’s healthcare overhaul, House Speaker John Boehner (R-Ohio) continues to push the logic that “Obamacare” will worsen unemployment.

“‘Priorities of the People: Repealing ObamaCare Critical to Creating Jobs, Growing Economy,'” he posted from his @SpeakerBoehner account on Monday.

Boehner attached the hashtag #HCRcostsjobs, which has since picked up speed on the network.

A poll much discussed over the weekend, meanwhile, showed that support for repeal has dropped sharply, and that overall opposition to the overhaul is near its lowest point since September 2009.