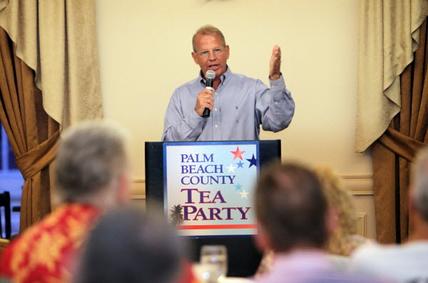 WELLINGTON — Rick Scott proved an outsider who spends more than $70 million of his own money can get elected in Florida. Mike McCalister is testing whether an outsider without Scott’s personal fortune can win.

“I’m not a politician and if that’s what you’re looking for, I’m not your guy,” McCalister told a tea party audience of about 100 west of Boca Raton on Monday night.

On Tuesday, he introduced himself to a different tea party crowd of about 80 as a “God-fearing, America-loving, flag-waving, gun-owning businessman who’s running for U.S. Senate.”

McCalister’s campaign raised a meager $12,171 through June 30. But he emerged last week as the surprise leader among 2012 Republican Senate candidates in a Quinnipiac University poll.

Previous Post Why the Tea Party is unyielding on the debt ceiling
Next Post Surprise leader in Florida GOP race for U.S. Senate speaks to Palm Beach County tea partiers