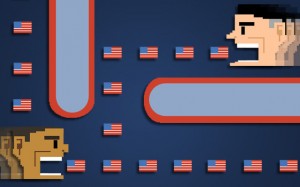 Whether you’re casting your ballot for Obama or Romney this November, or you’re still on the fence, chances are both campaigns know it, thanks to vast amounts of personal data they've collected about eligible voters. In the seven weeks remaining until the election on Nov. 6, both campaigns will feed this data into statistical models to determine whether, and how, to enlist your support.

In a tight general election race (pre-debate polls show Obama leads Romney by about two points nationally), victory may hinge on which candidate best uses data to suss out supporters in unlikely places and get them to the polls. As campaigns crunch the numbers, they face few rules governing how they use the data; those they follow are largely self-imposed, or else dictated by licensing agreements with data suppliers. “It’s less regulated than commercial applications of the same thing,” says Michael Simon, principle with The Victors Group, who ran voter targeting for Obama in 2008.

Data mining to target voters is nothing new, of course. Before television, direct marketing and analytics software, campaign workers in local precincts knew plenty about their neighbors, and used that information to make personal appeals. Later, candidates mashed up public records with consumer marketing data to develop advertising and fundraising appeals. Now, there’s more data, it’s centrally managed and may include people’s social connections. Meanwhile, independent advocacy groups that support candidates or specific issues, but which aren’t related to official campaigns or parties, also collect data from the same types of sources to target voters.

All that profiling works for candidates, but voters are leery. In a study published in July by the Annenberg School of Communications, 86% of people surveyed said they were against receiving targeted political advertising; 64% said they would be at least somewhat less likely to support a candidate who bought information about their online activities and then sent them different ads than their neighbors.

zp8497586rq
Previous Post The Rumble in the Rat’s Mouth: Join us for the 3rd Presidential Debate!
Next Post Conservative PAC backs Todd Akin in Missouri