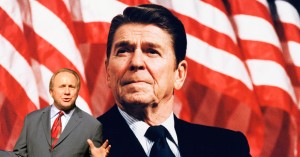 In the world of email, a short list of companies dominate–Google, AOL, Yahoo, Microsoft–but there’s a new player in the game that’s ready to tear down their firewalls: Ronald Reagan. Just as Reagan took on Walter Mondale and Jimmy Carter, the conservative icon’s family isn’t about to bow down to any lily-livered liberals, be them presidential candidates or billion-dollar tech giants.

Last year, in his father’s memory, Reagan’s son Michael launched an email service to end the monopoly of left-wing Internet companies. His charge was simple: “Every time you use your e-mail from companies like Google, AOL, Yahoo, Hotmail, Apple and others, you are helping liberals,” Reagan wrote at the time. “These companies are, and will continue, to be huge supporters financially and with technology of those that are hurting our country.” For only a small $39.95 annual fee, conservatives around the country could purchase an @Reagan.com email address, and rest easy knowing their money was going only toward conservative causes.

Today, on the eve his late father’s 100th birthday, we caught up with Michael Reagan to find out how the hot startup was faring–and how he planned to win this one for the Gipper.

As Reagan tells it, the service is flourishing. With little marketing, Reagan Email is growing, and on the path to becoming a big threat to Google, AOL, and others.
“I’m excited by the fact that we started, when? April of last year? We haven’t done much promotion, and we have sold 4,000 accounts,” says Reagan. “When I go out and do interviews, if I’m on Sean Hannity, and I say I have an @Reagan.com email service, I can sell 1,000. Wham!”