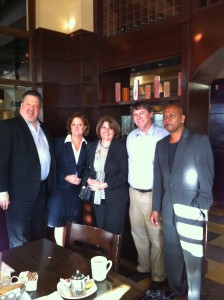 BOCA RATON, FL—The League of Educational Awareness of the Holocaust™ (LEAH) Board of Directors recently hosted a dinner at Max’s Grille with Dr. Samuel Paul, Associate Professor of Digital Resources at the Shoah Foundation Institute, University of Southern California. The event was underwritten by LEAH Board members, Karol and Marshall Hershon, and celebrated the successful partnership between LEAH, the exclusive underwriter for the Florida Atlantic University‘s (FAU) Visual History Archive project, and the University of Southern California (USC), as well as fostered innovative strategies to expand utilization of the Visual History Archive.

Also in attendance were Terri Berns, Director of Communications, Cultural Affairs & Donor Relations, and Ken Frankel, Head of Reference and Instructional Services, both of the Florida Atlantic University.

“We are proud to continue our partnership with USC and the Visual History Archive at FAU,” stated Daniel S. Schwimmer, President of LEAH™  “These relationships are essential to expanding our mission and ensuring that we educate the public on genocidal atrocities that will only remain a part of the past by investing in the future.”

The Holocaust Visual History Archive at FAU is one of only 17 sites in the United States where students, professors, community members and leaders can access testimonies from the University of Southern California Shoah Foundation Institute’s, Holocaust Visual History Archive.  In 1994, after filming Schindler’s List, Steven Spielberg established Survivors of the Shoah Visual History Foundation to document the experience of survivors and other witnesses to the Holocaust, including those who aided, rescued and liberated the survivors. With a collection of nearly 52,000 video testimonies in 32 languages and from 56 countries, the Visual History Archive is one of the largest video digital libraries in the world, requiring 135 terabytes of storage. The USC Shoah Foundation Institute interviewed Jewish survivors, homosexual survivors, Jehovah’s Witness survivors, liberators and liberation witnesses, political prisoners, rescuers and aid providers, Roma and Sinti survivors (Gypsy), survivors of Eugenics policies and war crimes trials participants.

LEAH™ is a non-sectarian not-for-profit organization whose mission is to raise awareness and funds to support and encourage educational efforts for children to help eliminate prejudice and hatred using lessons learned the Holocaust and other genocides, including Darfur, Rwanda, and Bosnia.  LEAH™ funds educational programs for youth that promote tolerance, support diversity, and teach about the destructive forces of hate and bigotry.   Since its inception in 1996, LEAH has fulfilled more than 1.6 million in educational grants to schools and not-for-profit organizations throughout the state, and is the exclusive underwriter for Visual History Archive Center at the Florida Atlantic University.