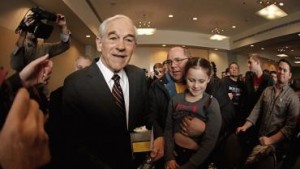 Libertarian-leaning voters particularly celebrate that Paul “speaks truth to power,” appears to stand against big government and government spending, and is outspoken in opposition to foreign wars and interventions, he said.

That’s why Paul appears to be resonating with them, Tulchin said.

“He was the Tea Party movement before there was a Tea Party movement,” Tulchin said. “Ron Paul has been consistent, sometimes in a wacky way … so the press has been outright dismissive of the guy from the start. But his poll numbers have been good.”

John Dennis, a 2010 GOP congressional candidate in San Francisco who ran against Rep. Nancy Pelosi, has become a major organizer in Paul’s campaign. Dennis said the campaign and its grassroots followers learned critical lessons since 2008, when Paul also ran for president.

Dennis said that during the previous campaign, 600 precincts in Iowa had no Paul representation at the caucuses – a factor that he said cost votes in a process where Iowans turn out to schools and community centers to hear candidates’ campaign pitches before they make their preferences known.