So last night’s Republican primary debate, despite being so early and without a party headliner, still managed to outdo chatter about Osama bin Laden in terms of Twitter conversation: 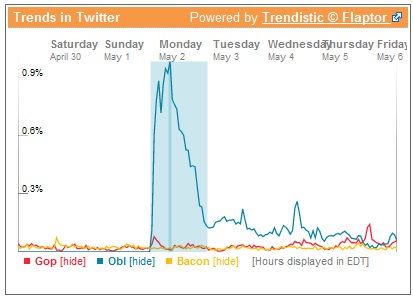 “GOP” in Twitter mentions as seen through Trendistic, compared to “obl” (for references to Osama bin Laden) and, as a baseline, the always popular “bacon.”

Previous Post This Is How The World Reacted To Osama Bin Laden’s Death
Next Post Newt Gingrich: I Signed the Pledge To Repeal Obamacare, Have You?